Day 1: FotLC through the 113 lenses from The Art of Game Design

I have been saying that the design of Fall of the last City is essentially complete for a while now. Last night in the Exploratory Game Design class I teach I gave the students the task of answering the questions on one of Jesse Schell's 'Lense' cards from his Deck of Lenses (App). The deck has 113 cards each asking questions about your game from a different perspective. It's an amazing tool based on his book 'The Art of Game Design'. It's also a great way to throw hard thinking and productive learning at a class when you find you have half an hour of extra class time.

To be fair to them I said that I would do the exercise too for a game I was working on. It's been something I have been saying to myself that I should do for a while. Well it was, as I suspected, very useful. So I am going to post it here and try to do a card a day for the next 113 days. It will be interesting to see how my 'finished' game design stands up to the scrutiny. So here we go. 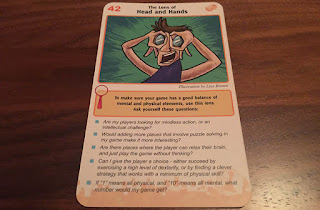 To make sure your game has a good balance of mental and physical elements, use this lense.
Ask yourself these questions:

Are my players looking for mindless action, or an intellectual challenge?
My players are mostly looking for intellectual Challenge. My game may work at cross purposes with this because it is fast paced and ‘sport like’ due to the real time nature. I ‘think’ that makes the game better, but it definitely makes it harder.

Would adding more places that involve puzzle solving in my game make it more interesting?
There is a little puzzle solving with path placement, I smoothed that curve by removing the grid in the game as fitting to the grid seemed mostly frustrating where in a game like blokus that is not timed it’s satisfying.

Are there places where the player can relax their brain, and just play the game without thinking?
There is little or no relaxing your brain, except when there are challenges. For players not involved they allow a rest and passive entertainment. Making them more of a show might be a thing I need to reinforce. (Only provide two challenge tokens?)

Can I give the player a choice - either succeed by exercising a high level of dexterity, or by finding a clever strategy that works with a minimum of physical skill?
I do make the player think if they want to avoid moving fast, that tension is a strong point but I do not reward either strategy explicitly.

If "1" means all physical, and "10" means all mental, what number would my game get?
I would make the game a 7. The kind of mental skill it requires though is very agile. Situational awareness and the ability to place the pieces precisely and quickly do give an advantage.
Posted by Unknown at 5:18 PM

What people say about the game:

"I thought this was going to be Civilization but it's StreetFighter!"

"I can’t believe all that happened in one game!"